From 2015-20 one of the hottest television shows was “Empire,” the fictional drama focused on the Lyon family, which had started from the ground up to build an empire in the music industry.

While the show featured banging music and eye-catching fashion, the core of the show was about a family that essentially did not get along but was forced to work together in order to build their empire.

Bobby and Michelle Gaffney have taken a page out of the Lyon’s playbook as they also work to build their own empire, without the backstabbing and murder plots but instead use delicious food and strong cannabis.

In less than a year, the Gaffney have started two businesses right next door to each other in Norman’s Merkle Creek Plaza. The first was Bee High Dispensary, which opened its doors in January. Then in July they opened Delish Nutrish Café & Meal Prep, a restaurant that feeds the soul in a healthy way.

Both businesses are family-owned and run. Along with Bobby and Michelle, their three sons Braden (21), Bentley (18) and Brion (17) put in work at both establishments.

“We’re trying to perfect it, I guess, at this level. We’re teaching our kids. So we have a 17- and 18-year-old that actively cook over here and make new drinks and things for people,” Michelle said. “Our 17-year-old actually wants to go to culinary school. So that is something he’ll end up stepping up into the role of head chef as the position my husband carries.”

With Bobby as the head chef, Delish Nutrish serves all organic and healthy food. Everything from Lamb chops and steak to Korean BBQ bowls and burgers.

“We try to source local ingredients. We do have some farms that we work with. Everything is certified organic down to the spices that we use,” Michelle said. “We use certified organic chicken. We use grass fed meats. So everything that we use here, ingredient-wise, you can eat and know that it is very good for you. We don’t use any oils that are bad. We use avocado oils, coconut oils, things like that and we also portion our food correctly.”

Creating an environment where people can eat well, but also healthy goes back to how the Gaffney live their own lives.

“Over the years we’ve always tried to eat better seeing what our parents have gone through with their health,” Michelle said. “We started just changing, eating habits and things. But that’s always been a passion that we’ve incorporated at home and we just always said, when we got to a place that we could, we would love to have a healthy cafe. Being parents of three boys that played sports and you’re busy and you’re running the kids here and there, McDonald’s or Burger King is where you’d end up getting something to eat because it’s quick and fast and you don’t have time to cook, but it’s horrible for you. So yeah, that’s basically from our experience raising our kids and wanting to be healthier.”

The meal prep portion of the restaurant has become popular among the athletes at the University of Oklahoma. It has picked up steadily in just a few months. 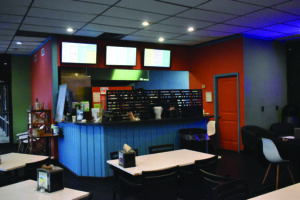 “I was surprised actually,” Bobby said. “Once one came in, he spread the word on how the food tasted. Next thing, another one came in. That word of mouth is nuts.”

Even though Bee High was the first to open, according to Bobby, the family has always had an eye on getting into the restaurant business. Both he and Michelle have extensive experience working at other eateries and were looking for the right opportunity. 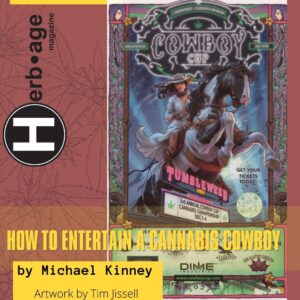 But then came State Question 788 in which Oklahomans voted to legalize marijuana in 2018.

The couple saw that as an opportunity they couldn’t pass on. As a family that had a strong connection to the positive effects of marijuana and CBD products, they put their focus into getting into the field.

It wasn’t until 2020 during the COVID-19 pandemic that they decided to go for it. According to Bobby, they saw other people shrinking back and their mentality was to push forward.

When the Gaffney first approached the landlord of Merkle Creek Plaza about opening their dispensary, they were initially told no. She wanted a restaurant in that spot, which had been lying empty for the past eight years. According to Bobby, his oldest son Braden was thinking on his feet and told their potential landlord that the restaurant was part of the plan. That was seemingly enough to convince the landlord and took over the space in September of 2020. But then the hard part came and they had to figure out if it was actually legal and what they would have to do to make it so. 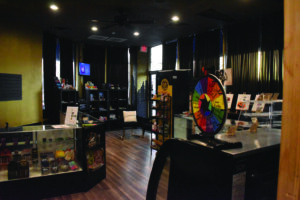 After the family completely gutted and renovated the space, which included putting up a wall to separate the two businesses, High Bee opened at the start of 2021. Despite joining an ever-growing field of dispensaries in Oklahoma, the Gaffney like the direction High Bee is going. “It takes a lot of money to get a product on the shelf,” Michelle said. “So we’re at that point where we’re starting to expand. I think we have 30 strains of different shelves right now that we carry from diamond down to the silver shelf. Actually, we have a value shelf there too.”

As they continue to expand, the Gaffney are looking to increase their product line to at least 50 strains. “It’s really just putting money back in, and now that we’ve perfected things here, we have our processors. So we’re going to start making organic and sugar-free candies, that are edibles and things,” Michelle said. “So I think that’s a market too, that other people haven’t touched to look at. Yeah. It’s medicinal and everybody likes edibles, but can a diabetic come in or can someone with cancer come in or someone that doesn’t like sugar or wants more natural foods. So we’re starting to incorporate that as well.”

The Gaffney credit their growth to the type of service they provide their customers. Because they are a family operation, they believe that enables them to add a personal touch that most people aren’t used to getting. “We’re smaller. So what I’m seeing is that we’re a lot more personable,” Bobby said. “A lot folks tell us that they’re able to come in and ask a question and not feel rushed, not feel like they have to hurry up and get out because there’s a 50 mile wait or it’s so big and they see so many people that you’re just another person in the herd.” Even though High Bee and Delish are two separate businesses, the Gaffney have found a way to meld the pair. When the cafe closes down at 4 p.m., it later becomes a lunge for customers at Bee High.