Mike Bennett, AKA Big Mike, served 21 years in the military. 10 years in the Marines, and 11 years in the army to be exact. He himself would tell you that he was “pretty damn good at it”.

Big Mike was injured in 2012 while in Afghanistan. He was on his fourth combat tour. He developed Chronic inflammatory demyelinating polyradiculoneuropathy or CIDP.  CIDP is a rare type of autoimmune disorder. In an autoimmune disease, the body attacks its own tissues. CIDP paralyzes as it creeps through your body. Big Mike said that his, “started in my toes and it’s up my waist now”.

“I’ve been in a wheelchair for 4 years permanently. I retired in 2013. I got on pills. So many pills. My pills were on pills.”

“I was in the active duty military. So I never use cannabis.” Big Mike was reflecting. “My dad was an avid consumer. I never got to smoke with him. I loved that he would be hanging out with his buddies and enjoying life. I just thought I’d give it a shot. I did and I haven’t turned back. I haven’t used any over-the-counter medication for any prescribed from a doctor since. I mean… even like blood pressure medication. No pills are going into my body. I just use all different types of cannabis.” 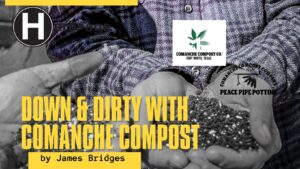 Big Mike continued, “In 1996, when I was in the Marine Corps, they did the Anthrax vaccination. It’s kind of a similar situation to the Covid vaccine. It was mandatory for the military. I developed some really bad skin problems. I get it in my face or my chest and my back. Now, all I use is cannabis cream.  That’s it.”

Big Mike travels all over the country and “my mom lives in Yukon. She’s completely deaf and she wears hearing aids. Back in the 60s and 70s she was going to concerts and so she’s completely deaf, but she reads lips. So she started talking to her doctor and everything and then got approved and got her card. She is an older lady and she doesn’t feel comfortable going to events like the Cowboy Cup or even dispensaries. So I try to help her out as much as possible.”

Big Mike says, “I’m constantly traveling. I heard about the Cowboy Cup so my buddy and I went and hung out at my mom’s house and told her that we are going to the Cowboy cup in Stillwater. She was so excited and it was just great to go up there and meet all these wonderful vendors and everything. Meeting Daniel was such an awesome experience. 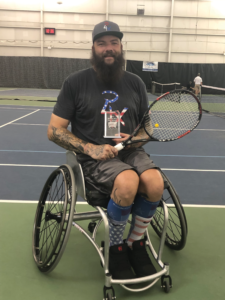 “I showed up on the first day of the Cowboy Cup. I’m wearing a hat that says Big Mike and Tennessee. So it already looks like I’m an out-of-stater. I’m in my wheelchair in line, but I notice that a sign says vendors only. I see one guy walking around with a radio on his hip. He happened to be Daniel without my knowledge. I told him I bought some tickets online. I asked if I was in the right area. He told me to check in at the building. “No problems.” So I went in and I was talking to all the vendors and stuff.  Someone finally asked if I was a vendor. I told them that Daniel said to check in. They smiled and continued enjoying themselves. I saw Daniel later on during the cup. He sat down with me and asked if I had seen the lady in a wheelchair going around. I let him know that I had. That’s when he let me know that it was his wife.”

Both Big Mike and Daniel Lewis say it was as if they had this immediate connection and now there’s an understanding of one another on a level that means more than just the surface. The Cowboy Cup is definitely one that I will return to year after year.