As I entered the dwellings of what one might call the traveling type I was greeted. Gratitude was in the air, even at 3:00 AM. I entered with a smile.

I was then introduced to a few more characters. Although they are not for this tale. These individuals were in a perfect environment for psychological warfare of sorts.

The one who greeted me at the door was apparently the glue.

I began a conversation.One with the glue. I was amazed at the symbols, letters, and zeros floating from the top of his head as he spoke. It was intellect. Somewhat of a knowledge that was kind and true. A knowledge known from experience.

That’s when he introduced himself as Mr. Green, AKA Trevor Green.

“Music has always been a big part of my life. I grew up on classic rock. Simon & Garfunkel, Pink Floyd, that genre. Then I got into the beginning of Hip Hop. I got a high out of learning something. It was like the beginning of a movement. You know? So as I started listening to the rhyme scheme and everything I really loved it.

I’ve always loved poetry. So, it kind of fit. That’s just something that had a lot of impact on me.

I was in my teens and I listened to grunge. A bunch of grunge. Then I got into Indian music. Once I got back into some hip hop again I performed more of a spoken word thing. I slowly worked it into actual hip hop. I’m using more of that structure.”

Trevor’s inspiration is clearly from all of his surroundings. It’s artists like Trevor that intrigue me the most. Ones that clearly lack the ability to pigeonhole themselves into a genre.

Trevor talked about deeper inspiration. “Until about a year or so ago, I’d never written a happy song. A lot of people say writing comes from that expression of what we otherwise in our lives can’t find a way to do. Then I realized a lot of that was because of what I had circulating in my head.

Through the whole process of writing I’m able to see what my psyche is doing. From there I can say, okay, well I have to choose to put out the positivity. The positivity that I’m trying to see in myself. What seems to help is the mindset that I take in order to cope and deal with the stressors of everyday life. Like we all do.”

It was at that point I could imagine myself lifted. I sensed the positive outlook on this train and I wanted a first class ticket.

“I’ve been through several drug consultations and things. I did that because of a court-appointed situation. It doesn’t take long to see it was about control and the psychology of it. Most people twist and turn things in order to win. It’s not necessary.

So now that I’m able to see what my psyche is doing, I can control things that apply to me. On a moralistic level that makes me want to be better myself.

When I started writing it was never to get famous. I was expressing myself. So that’s what I do now. If this helps people then I’m going to continue. There are still all those negative times in my life. I feel like I got it, but there are still times when I write angry music. Wild-ass music that’s just like, where I’m even thinking, wow this dude is messed up. It’s just where you choose to let your mind go.

Nearly every day I struggle with the negative. This morning, when I woke up, for some reason I had this itching feeling. Like why am I even doing this? What is the purpose of it? Then I think of this one thing. I’ve got enough affirmations. I just have to stop letting that self-doubt and that negativity in. Wrangle your thoughts so you are dialed in and focused. 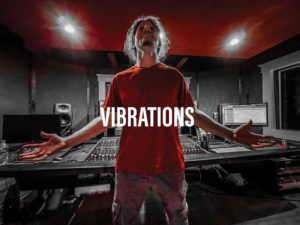 “I grew up in a Baptist Children’s Home. My family is broken. When I was probably 13 or 14-years-old I had tons of anxiety. I didn’t know what to call it. Then I had all these things on my plate. I was at the Children’s Home. I was vice president of the student council. I went on leadership outings. I was always helping that family home with livestock. I was doing work at another ranch. I was an honors student in school. I was just trying to figure it out. I didn’t realize how strained I was. That’s when I first experimented with bud.

I figured out quickly that the stigma that society has on weed causes people to do things unsafely. The psychology of a younger person when they start using bud under those stigma causes the inability to release stress.

For me, I know and I believe that I wouldn’t have wasted as many years trying to figure something out in my own head.

I asked Trevor about the medicinal values and how he interprets them.

“As I got older I started developing stomach issues. Severe acid reflux and GERD. In four months I lost 40 lbs. Every day, for about 2 months, I couldn’t eat without getting sick. My throat is permanently scarred from it. Yes there were things in my life that were causing it. One of the main things that I found, even as I grow older, is that because of traumatic conditions I’ve been in, stress is a huge cause. Bud was always there to help.

Since then I’ve just learned how to work with it.

As a youth there was so much stigma that it was just negative. If you imagine you can almost understand how to use cannabis you felt wrong. But for some reason it was healthy. it’s just such a confusing thing to put in someone’s head.”

Check out Mr. Green’s new single “Right With It” on Spotify and Youtube.