The Machine Is Alive: Robot Pharmer

“This thing started in a garage in West Seattle!”

The excitement to talk about Robot Pharmer was filling the air as we finally got a chance to sit down with the creators of this powerhouse brand. From seed to sale this unmistakable company has been producing products that are flying off of their very own dispensary shelves. “We all work damn near seven days a week. We have a lot of pride.”

Jeff Ely, co-owner and visionair, was ecstatic and very passionate about his team. “For Isaac and Josh to really take that project on and believe in it, you know? We came together and really learned about one another. All of us brought a different skill set. We were able to recognize that and work very well with everyone involved.” The heart and soul of Robot Pharmer was ready to explode into the world with the early team of four entrepreneurs. So much so they were able to describe their experience as somewhat of a calling.

Jeff had a very successful real estate career until market woes and financial burdens hit a volatile market. “Then the market crashed and you know I filed bankruptcy. I lost everything. I always loved Austin. So, I went back to start over. At first I did a number of random jobs. I started a business eventually building houses.” Jeff started a boat jet ski rental business. “We were operating on the two Lakes down there. This opportunity with Robot Pharmer came about. Josh was in Seattle at the time.”

Josh Wheat, co-owner and visionaire, divulged himself in the Seattle medical marijuana market early on. He started growing medicinal cannabis and eventually created the Robot Pharmer brand. “I wanted to have the robot as an ambassador for the community. I didn’t want it to be much like 420 pot leaf stuff. I wanted to create a robot that everyone could rally around instead of the cliche “stoner” look and feel. We got a really badass designer that was super creative. I was able to relay my ideas through him with sketches. He started creating different scenes in the industry.

So that’s how we got started with the Robot Pharmer brand. We wanted it to be a more inviting brand rather than just a “stoner” brand.” Soon after Josh described the Seattle medicinal scene as a “soon to disappear” environment as the recreational cannabis atmosphere hit the culture. “When Oklahoma became medical, I was in Texas and I talked to Jeff. We were actually still thinking about Oregon at the time.” Josh was laughing at this point. “So, as soon as Oklahoma opened up we knew where we were going. We already had one of our partners in Oklahoma, Brant. We had some equipment and he did as well. We were able to put that together and get an operation started.” “Garrett is our genetic junky. So the first two years we went through a ton of seeds.”

Josh seemed to know the brand story like the back of his hand. “We were just going through different things to start some different varieties of cultivars. It took a ton of patience. We wanted to try and figure out what the up sides and the down sides to each so that we can offer more strains that would fit the patients needs rather than just what is hyped at the moment. It’s a process.” Jeff was certain they could grow at this point. Now what to do with this big idea of being able to sell in their own dispensary? “Why would we not apply for licenses? The worst thing that happens is we lose $2,500” I thought to myself, let’s hit this full on. So that’s what we did. So then we got Josh.”

The room was in all ears as the two were traveling in a highway of recollection. “I was in Austin. I remember like it was yesterday.” Josh’s eyes moved to the recall position. “So we got the emails back. I called Jeff while he was with another partner. I said… y’all get together let me call you back. I called and I had a big American flag on my back. I was so happy. We got our licenses and then the dispensary license came in just hours later. We were all so happy.” Jeff spoke as if he was talking about his family.

His deep care for his team was very apparent. “Josh is up in Seattle and he had come down right before the news. Brant was in Broken Bow and was with his family. My longtime business partner and also close friend Isaac and I worked in the construction business for around 10 years. That’s where the connection is.” “Before plans go out the window you’re constantly pivoting based on what’s happening in the market.” Jeff explained. “I think we all at this point understand that the bills in place initially were put there with the intent to evolve.

We’re going to run a dispensary. We’re going to make concentrates, carts, edibles, and now there are gummies. It’s all really blowing up!” 28 The key component to every edible is the Chef. Robot Pharmer has filled that need and then some with the addition of their very own, Brandon Bentley. “We have an amazing Chef that’s working with us now.” The look in Josh’s eye was one of imagining the flavor. “It’s so great. Maybe you have some issues with a crop and it doesn’t come out exactly how you want. We need to create an outlet for this right?” We were curious to ask Jeff about some of the most challenging issues they are facing today. “We need to put some time and focus into some current challenges. Right now the market is flooding. It doesn’t matter if you’re talking about dispensaries, flower, and/or processing.

At the end of the day that’s what everybody is kind of up against. I think for us. We are doing well at going into those different zones when needed.” The Robot Pharmer team has learned the importance of diversity. In order to sustain certain waves of market reactions Robot Pharmer has built a foundation that can evolve with the overall flow of the industry. That in itself is a task many strive to achieve. “Josh created this brand like a sunset in Seattle.” Jeff confessed. “I don’t want to say I didn’t understand how important a brand was, but at the same time I was very focused on production numbers. This is kind of how I think.

The brand introduces that we have great quality products. I’m so happy and proud of the product we put out, but you have to have the branding with it. In a market that is so competitive everybody has that challenge right now. Including us. Luckily the amount of time and effort we put into our products and the amount of skus in a variety of products has given us that advantage that we need to try to meet some of these challenges.” Josh wanted to make clear that “The quality of products and the safety of our patients is very conscious on our end. The reality is… what are the patients going to like? As soon as you think you know, you’re in the wrong. You don’t know. So it’s really going through as much as possible, going off what we think people might like, and going through that 10 month pheno-hunting process. It’s hard to say because you just don’t know sometimes. I believe a lot of our success comes from staying consistent with our quality, safety, and marketability as a whole.” Jeff pointed out that everything they do is live resin. “We stay completely away from distillate. We have a one gram cart. That’s the only distillate that we use in any of our products.

Robot Pharmer, with total transparency, pheno-hunts and cultivates quality strains from real breeders, while maintaining credit where credit is due. They flower to the best of their skill set, which in our opinion, places them in the top 5% of flower quality in the state of Oklahoma. Watching Robot Pharmer naturally grow in the industry and provide an open learning environment has been very inspirational. If you’ve been looking, you don’t have to look far for some of the best flower, and flower based products, and of course friendly faces, from Robot Pharmer. 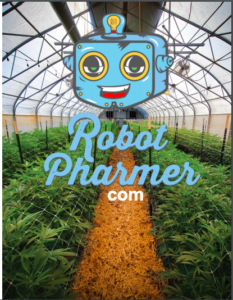