As manager of Everything’s OK Dispensary, one of the first faces a customer sees is Rakeem Willis. Better known as Kemo, the 32-year-old stands behind the counter dressed crisp and fresh, and looking to help people find the perfect strain or edible for the right occasion.

To see Willis today, it would appear life has been treating him well and he has everything going for him. However, Willis will tell anyone who asks that has not always been the case. More than a decade ago, he almost lost his life (twice), his ability to walk and the use of some important internal organs all because he was living a life he isn’t too proud of today.

Because of that, Willis had to endure things that most young men entering their prime never have to face and he didn’t know if he could handle those challenges.

“The biggest thing I learned is how strong. I never knew my strength,” Willis said. “I didn’t know how strong I could get. I had days where I was like, man, just go ahead and take me. I would ask God. I would literally pray, like please let this be the day. But I overcame that. I overcame some of those dark days that I had. My strength just became incredibly bigger.”

Willis grew up the son of a single mother who was constantly moving back and forth from Oklahoma to Texas. He described his mother as a rolling stone.

As he got older, Willis found himself attracted to the streets and the parting life. By the time he was out of his teens he was drinking heavily, ‘popping’ pills and living that rock and roll lifestyle.

“I was experimenting with life,” Willis said. “I was 21 at the time and following the crowd of what everybody else was doing, trying to be cool.”

After partying in Duncan (Ok.) one summer night in 2011, Willis and a friend were heading through Lawton. Willis realized he was too inebriated to drive, so he handed the keys to the car to his friend, who also had been drinking heavily.

“We were driving, passing the east side of Lawton, and right as we were passing, boom. I just remember boom, that’s all I remember. Boom,” Willis said. “I opened my eyes, man, and I was in the grass. It was crazy. We crashed and we hit a pole, but when the car hit the pole, it shattered the windshield.”

According to Willis he flew through the windshield and landed outside the car in the grass. The next thing he knew his friend had run up to him saying they needed to get out of there.

“I’m lying in the grass. He’s like, ‘Get up, man. We gotta go. We got to go. I just crashed. I got up to try to runaway,” Willis said. I fall instantly. I just feel this sharp pain go down the bottom of my spine, down my whole spine. I just freeze up and fall back on the ground, and I’m like ‘I can’t go. I think I’m paralyzed.’”

As if he didn’t understand the gravity of what Willis told him, the driver of the car kept encouraging him to get up and run and saying they needed to get out of there.

His friend never came back and to this day he has never heard from him.

Willis was laying in the middle of a back road, well after midnight and unable to get up or move. His phone was nowhere to be found. At that moment, Willis thought he was going to die.

But then a car came from around the bend, pulled up on the wreckage and spotted Willis all alone.

“She gets out the car and she came over to me, and she’s like, ‘Sweetheart, don’t move. Just lay here.’ She helped me out, laid me down flat and just told me to lay there, don’t move,” Willis said. “So, she called it. She actually ended up saving my life. She called the ambulance. The ambulance came there, picked me up, took me to the hospital.”

Willis was told he fractured the C2 vertebra in his neck, along with a few other injuries, in the crash. Yet, as bad as he was feeling, Willis was about to get even worse news that would have a much longer-lasting effect on him.

“Once they did the CAT scan and all that good stuff, that’s when they told me ‘Your kidneys are failing. You ever had any problems, any issues with your kidneys?’ I’m like, ‘Not that I’m aware of,’” Willis said. “So, they did some more tests on me and stuff like that, told me they were going to have to do a biopsy. So, we ended up doing a biopsy, and when the biopsy came back, they said, ‘It looks like basically, your kidneys are just failing due to high blood pressure.’ So, I guess through the car wreck and all that stuff, I lost a lot of blood, caused my blood pressure to skyrocket, and that’s just how it happened.”

At that point, Willis had no idea how long his kidneys had been in such a dire situation. What his doctors told him confused him even more. “It bothered me for a long time because they never really gave me an underlying cause. They just said they believed that my kidneys failed due to a lot of blood loss,” Willis said. “I had two different opinions from two different doctors. One of the doctors also told me that he believed that I probably had high blood pressure over some time. Because he said usually kidney failure and things like that happen over a time period. It’s not something that happens instantly. So, I just had two different opinions on it.”

As Willis laid in the intensive care unit and later in his hospital room for two months, he didn’t know what to make of the situation. He would ask himself for a long time if the wreck ultimately saved his life because he may never have discovered his kidney problems until it was too late.

“When I first found out about my kidney stuff, I was still drinking. I didn’t take it seriously,” Willis said. “I just didn’t take it seriously at all. And one day my mom came in and she had a really long talk with me. That was the moment that I realized this is the decision that I got to make to change my life, to better my life, to look forward to the future and be able to overcome this disease. So I think around that time when I was 21 is really when I had an eye opener for me.”

Unfortunately, his kidneys were in such bad shape, that it was going to take more than just cleaning up to save his life.

At 21 years of age, Willis had to make a life-changing decision about his health.

“I didn’t know what to do. So, I honestly contemplated for about a week before I made the decision that I was going to get on dialysis,” Willis said. “I was at what they call the beginning of end-stage renal failure. So, there was no coming back is how they looked at it. At that point you’re at end stage. They’re not going to come back, so you got to get on dialysis or you’re going to eventually die.”

That was enough to persuade Willis. He wanted more time to see if just changing his diet would have worked, but he didn’t want to take the chance.

However, he made that choice before he knew exactly what he would endure while doing dialysis, which is a procedure to remove waste products and excess fluid from the blood when the kidneys stop working properly. It often involves diverting blood to a machine to be cleaned.

“It’s the toughest thing I’ve ever dealt with in my life. I don’t wish it on my worst enemy,” Willis said. “I still have dreams about it sometimes. Three days a week, six hours a day. It became real hard on me, man, because I was trying to work and I was sick, too. When you’re dealing with kidney disease, you have days where you’re just feeling real, real bad. And you can’t control it. It’s just your body’s natural reaction to trying to fight out this disease, you know. Hardest thing I ever did in my life, man. Still to this day, I’ve never faced anything more challenging.”

Willis was on dialysis for almost five years. It wasn’t until he got a call at 3 a.m. in 2015 from the hospital to inform him they found a kidney. He had been on the transplant waiting list and they finally got hold of a match for him.

The transplant took place Oct. 2. Willis readily admitted he was scared going into the surgery because he knew some people didn’t make it out alive.

But it was also a relief. After four and half years of dialysis, Willis was ready for the next chapter in his life. That included making the necessary changes to ensure he would be around long enough to enjoy the kidney.

It took a life altering accident for Willis to turn his life around. He has been with Everything’s OK (10717 N. May Ave) since its founding in August of 2019. The former restaurant manager sees a bright future for it and himself.

Yet, Willis’s journey is never too far from his thoughts. He knows he has come a long way just to get to where he is now. 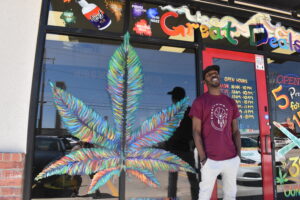