After some discussions with Herbage on transitioning into a new column, we agreed that an open column around the freedom fight for our basic rights to cultivate and choice to medicate was a win-win. The column will sweep over a broad range of topics concerning the reversal of the century-long “laws” that were established for a myriad of reasons to the basic right to cultivate any fruit, vegetable, flower or weed. We’ve come to a point where we are awakening to the power of numbers and overcoming the stigmas that were built via the hypnotic propaganda machine. To “govern” the “mental” (“government”) is a calculated assault on our basic human rights to choose freely. We’ll dive deep into some “higher” thoughts and question the systematic thumbs that have been hovering over our natural born freedoms. 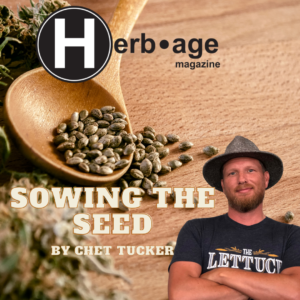 So, let’s dive into where we are today and then move back in time (with some sidebar musings along the way) to when no other man or woman could dictate our choice to Mother Earth. Today, we sit at a place where a majority of the United States of America have legalized cannabis in the medicinal or recreational form. As of the time of this article, 18 states (plus D.C.) are fully legal for “recreational” consumption. I won’t get too far off track but this is one of my personal WTF’s in a sense that it’s marked as “recreational” or “adult use” but alcohol doesn’t have any legal tags other than an age range which would be considered “adult use”. It’s been accepted for so long that it’s not considered “medicinal” or “recreational”. Obviously, cannabis has a proven medicinal track record so why categorize it either way unless you plan to further control and tax a medicine? With that, we have another 19 states that are medicinally legal for a total of 37 states – a landslide majority that should ratify on the base medicinal level.

So, at this point … why hasn’t it been decriminalized? Why has the federal government not descheduled the plant? It wouldn’t have anything to do with the weight of a pharmaceutical mafia and it’s pumping billions into the pockets of those that took oaths to serve the interests of the people? It wouldn’t have anything to do with the sweeping taxes (increased in nearly every recreational/adult program) earned by good ol’ Uncle Sam? It wouldn’t have to do with the incarcerations that siphon off billions of tax dollars to fund, run, and control corporate prison systems? Surely, it’s all done to help regulate the health of its citizens … and the answer is of course they control the health via controlling the substances deemed acceptable by the overarching (reaching) medical ownership.

We are just scratching the service of where plant based medicines begin flipping the tipping point and our birthrights are returned to choose, without penalty, that of which best suits our own bodies and minds. Should there be some regulation and policing of cannabis, I’d say yes. We certainly need to ensure that a product marketed as 20mgs of THC is properly processed and dosed so that there’s a controlled measurement and safety for those that are consuming cannabis. However, does that mean excessive taxes and a cap on how many personal plants we can grow in our own space? Allergies to peanuts, seafood, and things like tomatoes can cause more harm (and death) than cannabis but what strict laws are imposed to impede such growth or consumption? It’s not that far of a comparable stretch when you really stop to think. We’ll catch you next month as we dig into some of Oklahoma’s current laws and some of the bills that may impact us in the near future.