A Country of Integrity

When Clinton Pyatt’s small town roots called him home three years ago, he and wife Lisa decided to answer with Country Cannabis. As successful entrepreneurs in several industries – including nearly a decade of experience in commercial cannabis, the Pyatts recognized an opportunity to build an Oklahoma brand with principles like honesty, loyalty, and courage at the forefront of their operations. The Country Cannabis vision is focused on creating quality cannabis products with reliable efficacy that any patient can afford. “Weed for working’ folks” isn’t only a catchy motto – it’s another of their important values.

Country Cannabis is a vertically integrated Oklahoma brand that manufacturers cannabis products for patients around the state. Their dispensary in Wilburton, OK features products grown and processed at their 27,000 square foot facility in northeast Oklahoma. The Country Cannabis empire began with an extraction lab that manufactured infused pre rolls, concentrates, and topicals. Before long, the Pyatts built out a state-of-the-art kitchen to manufacture edibles like chocolates, gummies, and a THC beverage that gives a trustworthy dosing effect with every use.

The company has recently completed construction on its indoor cultivation facility. After successful outdoor and greenhouse harvests, Clinton and team set about constructing a space that would allow them a controlled environment to curate their genetics line.

Upholding plant integrity is the singular concern for the company’s cultivation team, who are eagerly hunting out top phenos for future projects. Country Cannabis’ commitment to its consumers has earned them licenses in eight states as of this writing. 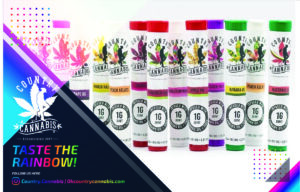 Forecasts project the brand to be operational in 25 states by the end of 2022. With a reach that big, Country Cannabis is doing a fine job of showing the wide world of weed what the Oklahoma Standard is really all about. The company is celebrating the acquisition of Sublime Brands and Korova, both highly sought-after brands around the country.

Regardless of location, Country Cannabis only hires locally, intent on reinvesting in the communities that support them. Consumers of the brand appreciate the peace of mind that comes from knowing the folks who grow and produce their medicine. Whether at the dispensary in Wilburton, OK or seeking out one of their collabs with the Sioux nation in Flandreau, SD, buyers shop confidently with the knowledge that their Country Cannabis products were manufactured by folks they know. Employing locals allows Country Cannabis to redistribute the company’s success to the people who sustain it. It gives them unique insight into the needs and wants of the communities in which they are building. 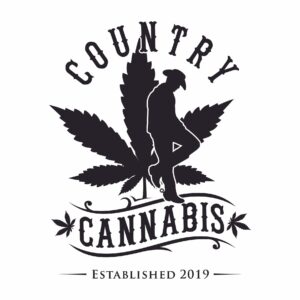