When cover artist Tim Jessell explains to school students his most famous work of art, they often look at with a quizzical look. Trying to explain the connection between NBA Hall of Famer Charles Barkley and Godzilla often garners him confused stares.

In the late 1990s Jessell was one of the hottest names in illustrations and he was part of a wildly popular Nike marketing campaign called Godzilla vs Charles Barkley. It was his illustrations featured on the posters and t-shirts that sprang up around the country at malls, shoe stores that were promoting Barkley’s newest sneaker at the time. His work was everywhere and it was recognizable.

However, by the 2010s, the illustration world had change. Freehand drawing had disappeared and the names who had helped take graphic artist famous were also vanishing.

But after more than 30 years in the game, Jessell has managed to stay relevant and busy for one simple reason. He can do whatever a client needs him to do. 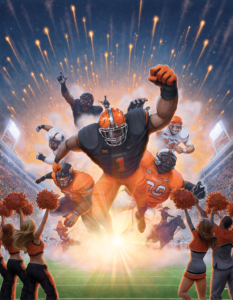 Jessell knew early on that art was going to be the path he would. Well, actually it was his mother who first saw his potential t when he was four years old and allowed him to develop it.

“She taught math and art, believe it or not. And she painted Mighty Mouse cartoons for Terrytoons while she was in college for extra money,” Jessell said. “So whatever my ability I have, I got from her, and she was very encouraging. She would call it a gift from God.”

Jessell said he could always draw better than anybody around him when he was growing up. That was the first sign to him that it would lead him somewhere.

Even then, Jessell gravitated toward illustrations and graphic art. He said there was no difference between fine art and pictures he saw in children’s books.

“Maurice Sendak’s ‘Where the Wild Things Are,’ that was the epitome of high art to me,” Jessell said. “Pictures telling a story. I never had that, “Oh, I want to be a fine artist versus a… ” I just never saw a difference. I just always knew, I don’t know why, just was always drawn to illustration.”

Jessell carried that passion with him throughout his youth. But it wasn’t until he was 17 years old and was introduced to John Martin that it finally crystalized he could actually make illustrations a career.

Martin was a painter, but also dabbled in design and illustration.  Jessell was at Martin’s studio in Kansas City and his eyes were opened to the possibilities.

“This was way before the digital had ravaged publishing and all that stuff, so illustrators were paid pretty well,” Jessell said. “I think I turned my head and there on the wall was a portrait of Lenny Dawson, the Kansas City quarterback, but it was painted on literally stretched pigskin football. And of course I love sports, absolutely love sports. So I just thought this looks like a heck of a way to make a living.”

After graduating from Terre Haute South Vigo High School, Jessell earned a scholarship to the University of Tulsa.

Even though Jessell had yet to dive headfirst into a career in illustration he was able to pick up side jobs and projects. This did not go over well with those who saw looked down on graphic artists compared to the other artistic disciplines. That included faculty members. 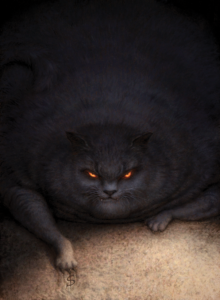 “I had a ceramics professor walk down the hall one day and said to me, “Tim, Why do you want to prostitute yourself?” Most times in life we think of our comebacks three days later,” Jessell said. “Well, this was one of the few times in my life I had it right there and I was ready. I said, “Tom, just because I have a client beforehand and not after it doesn’t make me a prostitute.” And he took a drag on his cigarette and his cup of coffee and he just looked at me sideways, and that was the last time he ever said that to me.”

However, it turned out Jessell wouldn’t have to travel too far at all.

He became the first employee of an upstart of The Turner Group, which was going to specialize in illustrations. It was founded by Clay Turner in Tulsa.

From there Jessell’s career blossomed. He signed with a firm out of New York started winning awards for his illustrations. That includes taking home the coveted Gold Medal from the Society of Illustrators the first time he entered.

“It’s kind of like directing your first movie and winning an Oscar,” Jessell said. “That kind of blew things up.”

It wasn’t until 1992 that Jessell stopped working for others and began working for himself when he became a freelance illustrator, a title he has held ever since.

However, as the years have gone on, Jessell has become the last of a dying breed of freelance illustrators. He says there were once around five or six in Oklahoma who made their living strictly on illustrations. But now, according to Jessell he is the last one standing

“The internet was not kind to illustrators because the bread and butter were publications and ad agencies,” Jessell said. “You could just feel it starting to change little by little. “Luckily my work has varied. Children’s publishing kept the lights on for a long time.” 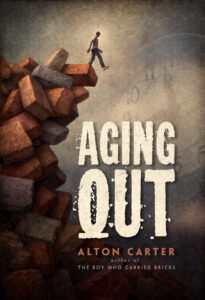 Yet, it may be the book that got away that Jessell looks back on the most.

“You are talking to the second choice for the Harry Potter series. I lost out to Mary GrandPré, who is an excellent illustrator,” Jessell said. “They let J.K. Rowling break the tie. An author never does that. That’s why I know the story because it’s so unusual. But at the time I didn’t know who Harry Potter was. I remember the art director at the time said “we think it might do well over here.’”

Even though Jessell lost out on illustrating for Harry Potter, he was given the series The Secrets of Droon instead. While it didn’t have the world-wide acclaim of the seven Potter books, it still paid the bills.

“I ended up doing 35 books,” Jessell said. “Honestly, I probably made more money doing than Harry Potter. She was paid the same as I was, because who knew? Nobody knew. That was my big fish that got away.”

Despite missing out on Harry Potter fame, Jessell has done alright by himself. A partial lists of clients include Southwest Airlines, USAA, Nike, Polaroid, AT&T, Apple and Nintendo.

Jessell can now add another new client to his long and ever-growing resume. He was brought in to convey the felling and importance of the 2020 Cowboy Cup.

“The Cowboy Cup, when I met with the folks behind it, we sat and chewed the fat on this and I personally kept pushing for the cowboy Oklahoma aspect of it,” Jessell said. “I’m thinking, well, the Cowboy Cup, the name obviously alone says cowboys. So I pushed cowboys as hard as I could.”

Jessell wanted to showcase the Oklahoma culture. Since he is originally from Indiana, it has always impressed him that Oklahoma had its own style and culture and that was what he wanted to get across in the poster. 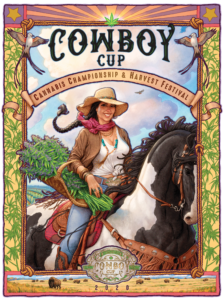 “My original vision, for whatever reason, popped into my head was the Sweethearts of the Rodeo,” Jessell said. “That’s kind of what had popped into my head since it was kind of this, kind of kitschy kind of fun, real overly Western, Roy Rogers kind of look. But as I got into it, it ended up becoming a more modern deal, but it’s still kind of has a retro organic vibe.”

The poster features a lovely lady sitting atop a black and white mare. She is dressed in jeans, designer cowboy boots, a white t-shirt, a red neckerchief, and a sun hat swaying in the breeze. With a beaming smile, she is carrying a basket.

But when Jessell submitted his original draft, one of the organizers, Bobbie Kay, lobbied for a few changes.

“She thought It’s too Western. That it was too much and that wasn’t the vibe they wanted,” Jessell said. And I don’t know if I really disagreed, I didn’t know if I agreed. So we made the gal dress more in, Western hipster. Western, but not so much kind of kitschy rodeo look. And when I was done with it I was just like, she was right. This covers more of what they’re going for. And yet still it’s plenty enough Western. So she was absolutely right. And I thought it turned out really well. So a lot of times, I’ll admit, if you don’t stick to your original gut, a lot of times it kind of could get sideways on you, but she was absolutely right. … I believe the client and the purpose should influence the direction you go as much as anything.”

At the end of the day, Jessell knows he provided his clients what they want, and that was most important to him.

“Because I knew it was a festival, I wanted a quicker read,” Jessell said. “I could have done it like a fine oil painting and all, and they probably would have been happy with it. But I knew something a little bit more graphic, quicker read on that, on the shapes and stuff, would benefit the poster.”